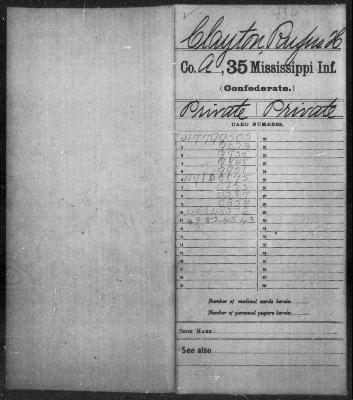 Served in Company A, 35th Inf., Mississippi as Pvt

35th Infantry Regiment, recruited at West Point and Corinth, was organized during the spring of 1862. The unit fought under General J.C. Moore at Corinth and lost 32 killed, 110 wounded, and 347 missing. Later it was assigned to Hebert's and Moore's Brigade, Department of Mississippi and East Louisiana, and in February, 1863, totalled 414 officers and men. It was captured when Vicksburg fell, and during the siege it had 20 killed and 82 wounded. After being exchanged, it was placed in Baldwin's and Sears' Brigade, served throughout the Atlanta Campaign, was in Tennessee with Hood, and aided in the defense of Mobile. The regiment sustained 20 casualties at New Hope Church, 36 at Kenesaw Mountain, 35 at the Chattahoochee River, and 47 in the Battle of Atlanta. It surrendered with the Department of Alabama, Mississippi, and East Louisiana. The field officers were Colonel William S. Berry, Lieutenant Colonels Charles R. Jordon and Reuben H. Shotwell, and Majors T.F. Holmes and Oliver C. Watson.